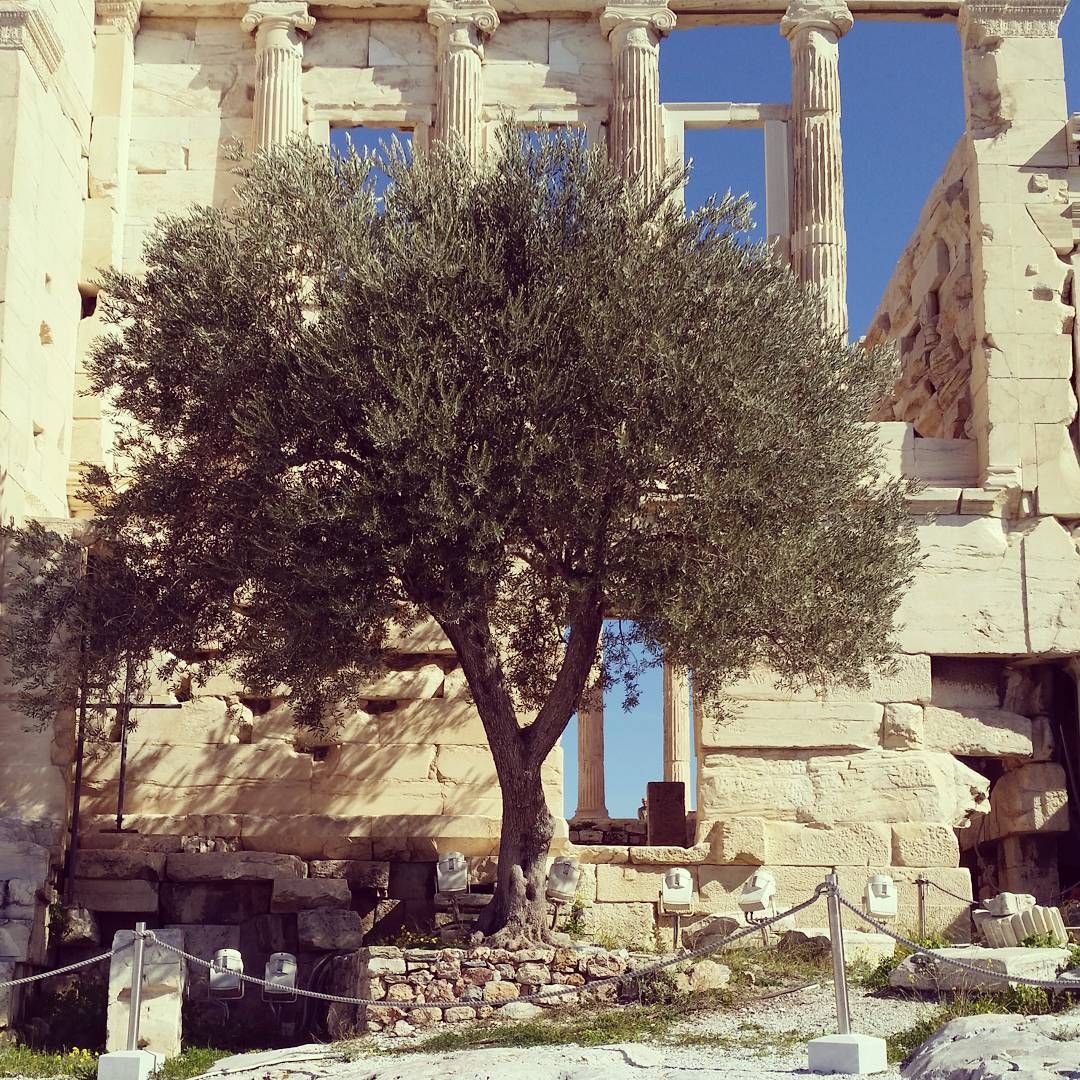 Atop the Acropolis of Athens stands an olive tree that is a symbol of hundreds of years of dedication and reverence.

Although this is not the ‘original’ tree honoured by pious Athenians over 2,500 years ago, it nonetheless stands in roughly the same spot as the original. The tree was an important foundation myth for Athens as it established the primacy of the goddess Athena within the city that would take her name.

Legend has it that Zeus offered a contest between Athena and Poseidon for the possession of Athens. Poseidon raised up his three-pronged trident, smashed it upon the hard rock of the Acropolis and out a salt spring sprang. Athena on the other hand produced an olive tree, its rich fruits bountifully dangling from the branches. This dramatic showdown between the two powerful Olympians was immortalized in stone, depicted on the West pediment sculptures of the Parthenon.

The Athenians chose Athena’s gift and the olive tree has remained a central part of Greek life ever since for all of its profound qualities. The leaves have been used to crown the heads of victorious athletes, generals and kings, the wood used to construct houses and boats, the oil used to give fuel to lamps, rubbed into the toned, muscled bodies of lithe athletes, added to all food dishes and the olives themselves — a staple in the Mediterranean diet and a valuable export throughout antiquity and today. Even the iconic Athenian tetradrachm coins had the leaves of the olive branch peeping to the left of Athena’s owl.

But the olive tree on the Athenian Acropolis held extra importance compared to all others due to its divine provenance. A Temple to Athena Polias (‘of the city’) was built c.525BC housing a xoanon cult statue inside — itself made from olive wood — and a precinct created for Athena’s sacred olive tree. When the Great King Xerxes’ Persian armies swept through Greece and sacked Athens in 480BC, the buildings on the Acropolis were set on fire and destroyed. Yet Herodotus tells us that the olive tree ‘sprouted the same day to a height of two cubits’ (3 ft.). Seeds from the remnants of this tree were replanted across Attica and in this way, all the olive groves surrounding Athens have a touch of Athena’s original tree in them.

Later in 421BC, when the Oath of Platea which had been sworn in 479BC to leave the ruins of the Persian destruction as memorials to the war had lapsed, the Erechtheion was built on the most sacred areas of the Acropolis. Not only were tombs to the mythical kings Kekrops and Erechtheus here but also the spot where Poseidon’s trident struck the ground and of course Athena’s sacred olive tree. Once again, the olive tree regained grand monuments in its vicinity and continued to be honoured and remain a central part of the Athenian religious and cultural landscape for centuries to come.

You read the original article from the reputable website Olive Oil Times as published by Laura Aitken-Burt in March 2015.